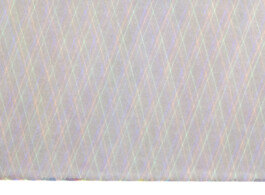 Coloured rays break through a diffuse grey on white paper. Line by line, from one edge of the picture to the other; diagonally from top left to bottom right in bright green, from top right to bottom left in warm red, horizontally and vertically in blurred violet. The latter is only marginally visible in the dense mist of the grey fields, the filled-in diamond shapes, which are squeezed between the grids of lines. Contoured, clearly visible from a certain distance, the rays of red and green shimmer across the surface of the picture and compete for attention. In the same way that when looking into the distance everything appears bluish and blurred towards the horizon, with warm colours emerging and cooler ones retreating, these aesthetic phenomena can be experienced in analogy to nature on Luise von Rohden's drawings.

When I began writing this text to look at the new series of works in which Luise von Rohden's grids increasingly consist of coloured structures, I was firmly convinced that I wanted to investigate their colourfulness. After a long struggle with the drawings, however, I had to come to the conclusion that colour is not the key to approaching the essence of the paintings more intensively. Although the colours are part of a system of lines – which the artist reinterprets again and again – they are not liberated from it, but rather subordinate themselves in favour of the system. So, what to write about? The answer is: Grey.

In these drawings in coloured ink, grey takes up the largest share of the picture's surface area. Grey is the background, centre and foreground of the image. In between, grids of red, green and purple lines criss-cross. On the one hand, the pictures seem closed, inaccessible, because the grey gives them a supposed indifference that refuses all association. Colours, on the other hand, appear more accessible because they promote connections of thought, which are usually inevitable. It is an interplay of deliberately placed empty spaces, which give the colour the necessary space to shine, and alternating surfaces, which negate all this by adding layer after layer to the contrasting non-colour of grey. But grey is not always grey. This is not a hermetically sealed, opaque application of paint, as a first cursory glance might suggest. On closer inspection, the grey reveals itself as transparent and nuanced. This first moment of being closed, which must be overcome by approaching the image and its structure, is both an inherent part of the construction and an external part of the reception. In the same way that the flatness gives way to a sense of pictorial space, the exclusion, i.e. standing in front of the closed image, gives way to immersion, i.e. the immersion into the image.

The coloured works live from immense polarity and ambivalence between openness and inaccessibility, between close-up and distant effects, between colour and non-colour. This tension becomes all the more impressive when one considers how the drawings are produced.

Grey is created when all colours are painted over each other with the same intensity. Currently, Luise von Rohden uses the primary colours blue, red and yellow for her fine structures. All other secondary colours can be generated from these primary colours. Colours and grey tones are only produced directly on the paper by superimposing and releasing them. The glow of the colours is mainly due to the translucent white paper. Where one of two layers of red is missing due to gaps between the brushstrokes, a green grid is created, because yellow and blue are each present in two layers, but red is only present in one layer. Where one of two layers of blue is missing, a red-orange grid is created. Where one of two layers of yellow is missing, a grid with a blue-violet tone is created. Thus, each colour to be seen in the image contains at least one layer of each primary colour. In the end, grey is created where all layers of the three colours are superimposed. To do this, the water and ink proportions of the different colours must be precisely matched to each other to make the intermediate areas appear grey at the end. A grey in which all colours can be found.

In some places, the works allow the process of creation to become comprehensible. It is the slight irregularities in the lines, the stained edges that betray the colours used, or the shifted spots on the edge so that not all layers cover the entire area that make the pictures come alive. In the failure of the system based on precision, the coloured images establish a reference to the artist's already existing monochrome canon. Nevertheless, the grey pattern between the colouring of the lines represents her entire graphic œuvre, readable as a consistent continuation of her previous artistic work. For, where previously work was done exclusively in variations of grey – obtained from diluted black and occasional admixtures of blue to change the tonality – it is now the pure colours, from coloured drawing ink, that are mixed into grey.

Having arrived here, the question now arises as to what the contemplation of grey over colour in Luise von Rohden's new series of works can reveal to us. In fact: Grey expresses the artist's desired precision when she mixes the colours in preparation for her paintings. It speaks for colours of equal intensity and purity. Grey is the sum total of all of her handiwork. Every handstroke of yellow, every handstroke of red and every handstroke of blue is in it. Grey is the evidence of fine-layered transparencies of yellow, red and blue. Grey is a symbol for space and time. The space it takes to connect up the image levels. The time it takes to apply all the swathes of colour in a picture. It is an indispensable part of the pictorial spaces in which polychrome breaks through. Only continuous wafting of the nuances of grey makes the shimmering rays shine. No light, no shadow. No light, no dark. But grey is within all the colours.